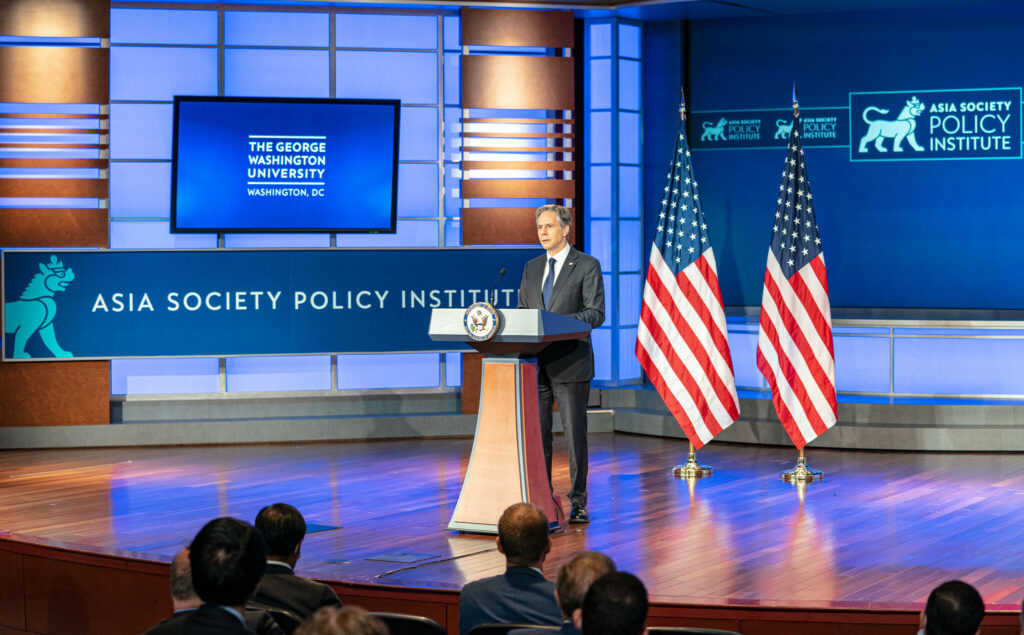 Indeed, Secretary Blinken had already presented the new political-strategic framework the State Department drafted for the Biden Administration on May 26th, during a speech hosted by the Asia Society Policy Institute at George Washington University.

This is an extremely important topic, because Communist China’s aggressive economic, political, and military global expansionism is the XXI Century’s main strategic threat. Yet, European politicians and media have paid little attention to the event.

This is not a surprising disattention, because almost all of their Governments, and the EU itself, proclaim loyalty to the US and the Atlantic Alliance, but at the same time support communist China’s financial and commercial expansion.

Indeed, so far the dual attitude of those European Governments and of the EU was based on manipulating information and on hopes that the Biden Administration would face the PRC with a weaker policy than the Trump Administration’s.

But the State Department’s new approach to the PRC is not weak. It is expressed with a different diplomatic style, but it express the United States’ unchanged ethical principles, as well as the same criticism to the Chinese communist regime.

Furthermore, the PRC is taking advantage of the Russian-Ukrainian crisis to increase her own military pressing in the Pacific, as well as operation to infiltrate Central-Eastern Europe’s finance and logistics sector, including through European companies.

To face this situation, the US has already initiated a global, defensive connection between the Countries of the Atlantic Alliance and the Indo-Pacific Allies, all while continuing Central-Eastern Europe’s economic consolidation in the Three Seas Initiative (TSI), in which Trieste has a fundamental role to play.

All of this means the time is coming for European Governments and for the EU to make a clear, effective choice between the US and the PRC, because soon it won’t be possible hiding the fundamental information on the matter to public opinion anymore.

In the meantime, we offer our readers this synthesis of the main points of the United States’ new approach to the PRC, drawn from Secretary of State Blinken’s May 26th speech and from his other recent, official statements. 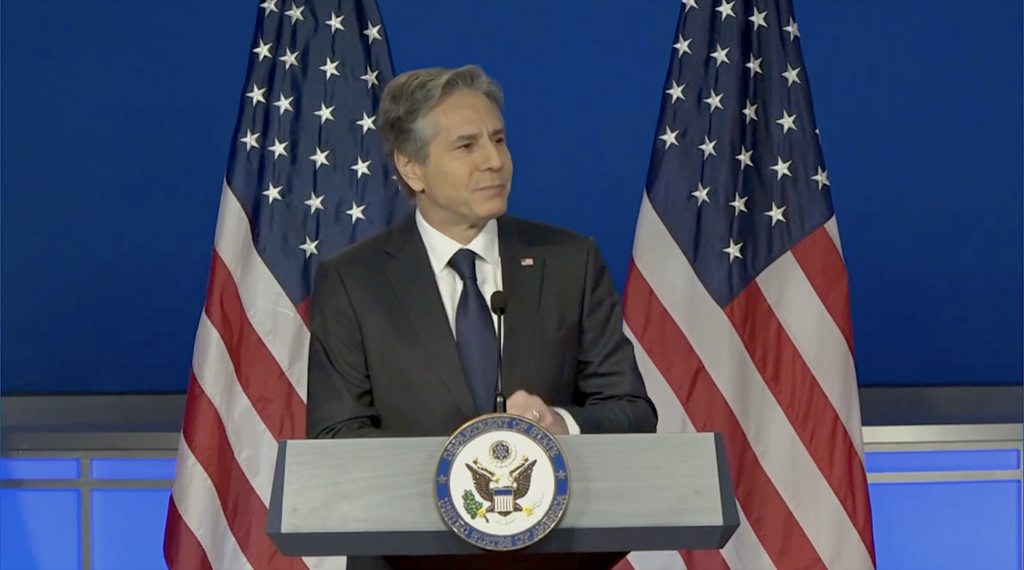 The State Department formulated these new strategic guidelines to allow US politics to successfully face the strategic, political, and economic risks arising from the People’s Republic of China’s extraordinary development and expansionism, all without forgetting that in a world of global problems, so must be solutions, and this requires international powers to cooperate.

Indeed, no State, alone, can successfully face global problems: be it environmental protection, political, economic, of health crises, it all requires increased cooperation and sharing. This is why the most important instrument to face them is diplomacy.

The premise of equitative, constructive relations Amons States is the international legal order consolidated after two World Wars as a set of meta-rules that all States share in order to protect undeniable, universal rights.

And right because it is a set of shared meta-rules, defending them is fundamental to grant the rights of all, and their eventual modification must result from common agreement and to extent the protection they offer, not to reduce it.

However, the protection of rights is a matter of deeds. Based on words only, the PRC supports the principles of sovereignty and territorial integrity that are enshrined in international law. In facts, however, the Chinese communist regime does not hesitate to breach them, or to side with Governments that breach them.

The PRC is far from the only actor seeking to unilaterally chance the international legal order, however, in the past 50 years, the Chinese communist regime obtained economic, diplomatic, and military resources that make it the only one who can actually fulfill this ambition.

And this hegemonic ambition to represent the most serious, long-term threat to the international law principles that regulate relations among States, protect their people, and provide for their economic exchanges.

And exactly because they are shared provisions, it is important that all other members of the International Community protects them, strengthening mutual diplomatic relations.

Indeed, it is necessary changing the international context in which the PRC acts, asserting and supporting an open, inclusive international legal order.

In view of this, again, the US is willing to promote cooperation between Pacific allies and those in the Atlantic Alliance.

Competition does not mean conflict

The importance of State relations and of the international legal order do also mean that the Untied States is going to bring forward competition between its Government system and the PRC’s without repeating the divisions of the Cold War era.

The US does not want to force others to chose them over the PRC, rather, they want to show the alternative is there, that there this choice exists, and therefore it provides an effective protection for their freedom.

This is one more reason why competing must leave room for mutual cooperation, and must never result in ethnic and cultural discrimination: the PRC would not have become the power it is without the hard work, the resourcefulness, and the talents of its people.

The United States is a melting pot also because they attract talented people from allover the world, including from China (in a way Blinken defines “magical”).

Downgrading a healthy competition to a racist conflict would mean contradicting the very principles of equality that are the core of the international legal order and of the United States’ promise as a land of opportunity for all.

Loyal to those values, the United States condemns the PRC’s political establishment’s ongoing genocide in the Xinjiang, where more than one million people face persecution because of their ethnic and religious identity (most of the Uyghurs are muslims).

The US shows equal solidarity to the Tibetan people, whose traditions, languages, and religion are persecuted, and stand with the people of Hong Kong, whose rights are being eroded in the name of “national security”.

The PRC tends to answer back to any critique claiming its abuses are “internal matters” that no one has the right to put into question.

Things however are different: those are violations of rights codified and approved by all States, enshrined, in particular, in the UN Charter and in the Universal Declaration of Human Rights.

The PRC committed before the whole international community to comply with those international instruments and, when it comes to Hong Kong, it confirmed it once again the Sino-British Joint Declaration, which is a Treaty registered before the United Nations.

Furthermore, the PRC refuses to stop its increasing claims over the South China Sea (see map), even in spite of the Hague tribunal’s ruling that confirms that maritime region must remain open also to Taiwan, the Philippines, Malaysia, Brunei, Indonesia, and to Vietnam.

Finally, when it comes to Taiwan, all parties must focus on maintaining the status quo. On its side, the US has maintained relations with the island of an unofficial level, without supporting claims for independence.

Instead, the PRC has increased tension with interventionist claims, military overflights, and retaliations against the States that established trade relations with Taiwan.

Any controversy in the Pacific region should be resolved though dialogue and promoting everyone’s interests, avoiding prevarication.

Compliance with shared provisions of international law is also the premise for a healthy economic development, one that grants free trade, worker’s rights, and, of course, free competition.

However, even in trade relations, the PRC has an asymmetric policy, both towards foreign companies working in China, and when it opens its own companies abroad.

A problem that is mostly overlooked in economic relations with the PRC is the complete control the State (thus the communist regime that rules over it) exercises on banks and companies.

The State’s strict control on the economy does, on one side, grants protection to the PRC’s enterprises, their intellectual properties, and facilitates their accession to loans and grants, while on the other side, foreign enterprises suffer numerous limitations, often accompanied with coercion.

The result is unfair competition. Furthermore, it is not uncommon that the PRC takes possession of others’ intellectual properties, only to flood the marked with similar, low-quality products, thus damaging also the buyers.

When it is the PEC to invest abroad, big promises do often hide unplayable debts, clauses that offer a disproportionate protection to the Chinese investors’ interests, as well as all of the aforementioned problems, both when it comes to the asymmetric protection of investments and compliance with international agreements.

And it is to better face this situation that the US established the Indo-Pacific Economic Framework for Prosperity – IPEF initiative, which has already 14 Member States.

Competition must not exclude cooperation. The United States and the PRC are the first and the second global power, but none can face, alone, problems that involve the people of all Countries.

For instance, environmental protection requires the PRC and the US to join forces, because they are the first and second CO2 emitter.

Indeed, it is the areas mostly affects by desertification, where droughts and food insecurity force people to emigrate; the consequent degradation becomes an hotbed for organized crime.

To face organized crime it is not only necessary addressing its causes: stopping it requires joint operations among the police of different States, especially when it comes to human or drug trafficking.

Finally, again in the framework of global security, it is fundamental preventing the proliferation of nuclear weapons. Washington supports the complete denuclearization of the Korean peninsula, and considers it allarmino that Beijing, instead, vetoes further UNSC sanctions against the Pyongyang regime.

The United States’ new policy in relations with the PRC is summed up in three principles: invest, align, compete.

Investing means strengthening domestic economic and political resources, aligning means synchronizing with the allies, in order to give a strong foundation to a healthy competition that brings advantages for all.

It is in this framework that the Department of State plans to establish a “China House”, a team in charge of studying and modernizing US diplomacy in view of the new policy.

The next decades are decisive to deliver the future of freedom and prosperity that the US wants to build together with the International community.

This is an extremely important goal and, as explained by Secretary of State Blinken, all can help achieve it.