Trieste, 28 November 2017. – The fiscal lawsuit initiated in May 2017 by the International Provisional Representative of the Free Territory of Trieste – I.P.R. F.T.T. versus the provisional administering Italian Government (LINK) has obtained a first, positive result during the appearance hearing, held on Tuesday, November 28th, 2017.

For instance, the Italian Government lodged its appearance before Court through the Trieste office of the State’s Legal Service, which however was not present before Court. The Judge established a new term to lodge written statements of case or written observations: May 15th, 2018.

The theses of the defense, as proposed by the Italian State’s Legal Service, were in facts indefensible and conflicting with the position of the Italian Government which, with a recent Decree on the management of the international Free Port admitted the exercise of temporary civil administration over the Free Territory of Trieste on mandate of the British and of the US Government, on behalf of the United Nations Security Council (LINK).

The I.P.R. F.T.T. has therefore stated to «appreciate the decision of the Italian Government to not support such indefensible theses any further, and also the decision of the Court to grant it a six months term to address and settle the dispute with negotiations that will certainly be reasonable and satisfactory for both parties».

The lawsuit of the I.P.R. F.T.T. is unprecedented, and it is supported also by the intervention of the citizens and of the enterprises of both the present-day Free Territory of Trieste and of other States. 485 interventions have already been lodged. Since the persons that wanted to attend the hearing were almost 200, they were assigned to the biggest courtroom in Trieste, the Court of assizes.

So far, Italian media applied stria censorship to all news on this matter, showing the embarrassment of the Italian political establishment when it comes to Question Trieste. 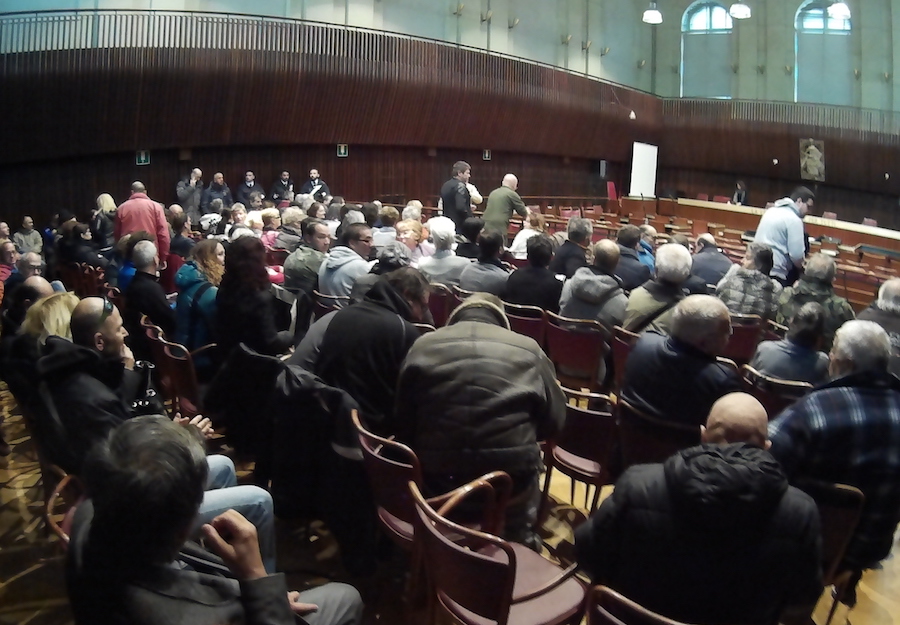 The citizens who entered the fiscal lawsuit are seated in the Court of assizes of the Courthouse of Trieste.