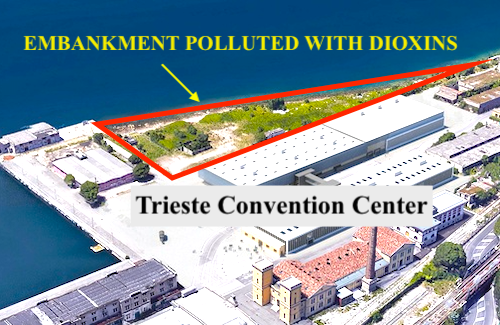 It is well known that the administration of the Municipality of Trieste by Mayor Roberto Dipiazza has launched, with the excuse of the EuroScience Open Forum – ESOF 2020, the construction and tendering of a congress center (Trieste Convention Center) in the Northern Free Port by falsely claiming to have full availability of the area.

This is why, since 25 October 2019, there is a documented criminal complaint against those responsible of the operation, who are charged with the crimes of falsehood in public deeds committed by public officers for the purpose of fraud and at the expenses of two public bodies: the Municipality itself and the international Free Port of Trieste, administered by the Port Authority (LINK).

The criminal complaint identifies those responsible of the operation in Mayor Dipiazza, the officers of the Municipality Santi Terranova (Secretary and Director General) and Enrico Conte (Director of the Department of Public Works, Project Financing, and Partnerships) as well as in the President of the Port Authority, Zeno d’Agostino.

However, the municipal administration of mayor Roberto Dipiazza and the President of the Port Authority Zeno D’Agostino did more than avoiding to inform the enterprises involved, the sponsors, the promoters of the ESOF, the media, and public opinion that the operation is illegal.

They have also concealed the fact, perfectly documented, that part of the area chosen to illegally host the congress center is contaminated with persistent organic pollutants – POPs, in particular dioxins, and in concentrations that are far above the safety limits for both human beings and for the environment.

The unaware workers and technicians involved in the construction site of the congress center have already been exposed to this threat and so would happen also to the future workers and users of that congress center unless, of course, the area is decontaminated of the hazardous pollution that affects it.

The area affected is the big embankment by the sea that extends from “Pier zero” (Molo 0) to the former Storehouse 28 (Magazzino 28), recently demolished and replaced by a new building, expected to host the congress center. Since 2005, it is confirmed that the hazardous pollution in the embankment includes also dioxins, hydrocarbons, and heavy metals.

In human beings, contamination by those substances causes, depending on the intensity and time of exposure, several pathogenic effects including skin diseases, liver disorders, disorders of the glucose metabolism, damages to the immune and endocrine systems, and hormonal imbalances, but also a wide range of cancers, as well as posing a serious threat to fetal and neonatal development.

That embankment is, in truth, the first portion of a huge illegal coastal landfill made of debris and toxic waste that the Municipality of Trieste itself opened and managed between 1973 and 1985 in the Northern Free Port (also called “old port”) along the apparently natural 1.4 km (about 1 mile) coastline from the “Pier zero” (Molo 0) to Barcola, which covers 10 hectares.

For twelve years, the Municipality dumped in the area all kind of debris and scraps, in particular, the slags and toxic ashes of the Municipal waste incineration plant, in breach of administrative and criminal law as well as of EU Directives regarding toxic and hazardous waste (Directive 78/319 EEC and following).

The external appearance of the poisonous landfill is deceptive, because it appears covered in regular dirt, grass, and bushes, also, it hosts seaside and sport resorts (including the office of the group that organizes the famous “Barcolana” sailing competition).

Yet, after 47 years, the poison is still there and it contaminates the soil, the air, and also the sea, because the huge coastal landfill was never reclaimed, or sealed.

The scandal, the evidences, and the omissions

The scandal of the Municipality of Trieste’s illegal landfill and the hazard that its poisons pose for both human beings and for the environment became public in 2005 and in 2007, with investigations and expert opinions of the judiciary and of the Port Authority itself.

This means that the situation is well known to both the Port Authority, to the current Mayor, Roberto Dipiazza, who was already in office from 2001 to 2011, and to the Municipal officers who were serving in the administrative offices involved.

The very first complaint had already been presented in 1973 (by the ENPA, an organization for animal welfare) and in 1980-1981 (WWF). In 1981, the Prefect of Trieste took action because the toxic ashes were leaking from the embankment into the sea, and the Province of Trieste’s laboratory for hygiene and prophylaxis confirmed that dioxins were leaking as well. In 1990 the local Health Authority (Azienda Sanitaria) declared it necessary closing the two seaside resorts opened in the area by the Railways and by the managing office of the Port (now Port Authority). Yet, no effective measures were taken.

In 2005, the problem was once again brought to public attention by Roberto Giurastante, who lodged a complaint to the N.O.E. (Environmental Operations Task Force) of the Carabinieri, and the Prosecution Office in Trieste was finally forced to investigate placing the whole area under seizure to obtain all needed specialized expertise about it, which confirmed the presence of dangerous pollution and the leaking of harmful substances in the terrestrial and maritime environment concerned.

Those findings became ground for the Port Authority’s own study to characterize the waste in the area and to ensure its safety. The soil sampling, which took place from 2005 to 2006, confirmed the nature and hazardousness of the pollution discovered by the previous experts of the judiciary.

The documentation of both the Prosecution Office (criminal proceeding No. 4336/05 RGnr) and of the Port Authority proves that the expertise identify as “Sub-area 3” of the landfill the embankment that is now included in the area of the congress center, and confirm that it is contaminated by abnormal, hazardous concentrations of hydrocarbons dioxins, furans, and heavy metals (LINK).

This means that, since 2005, the judiciary had all evidences needed not only to order also health controls to protect the users of that polluted area, but also to indict the municipal officers responsible of the pollution, and to order the remediation of the whole illegal landfill.

It does also mean that, since 2006, the Port Authority had plenty of elements to initiate a civil lawsuit against the Municipality, for it to pay the sealing and the remediation of the area.

Furthermore, the documentation does also prove that the municipal administration of Mayor Roberto Dipiazza was involved in both surveys due to the direct responsibility of the Municipality and also because the law vests on the Mayor the role of top health authority in the territory of the municipality.

But in 2007 the judicial authorities filed the criminal case, declaring that the offense of illegal landfill was time-barred, without taking into account its consequence: the permanent leaking of hazardous substances that harms the environment and poses a threat to public health.

The illegal landfill continues to spread its poison because the Mayor and the Port Authority have never taken care to seal or to decontaminate the area.

The liabilities of Dipiazza and of D’Agostino

The simplest solution to get rid of the contaminated landfill is to entomb it and use it to build the big logistics platform envisioned in the Northern Free Port under the Decree of the President of the Italian Republic No. 714/1978, art. 6 and Chart A (LINK), and under the General Regional Urban Plan, both in force (LINK).

But the construction of the logistics platform and the full reactivation of the Northern Free Port are prevented by an illegal political-speculative operation for the urbanization of that area, and both Roberto Dipiazza and Zeno D’Agostino are among its main promoters, as Mayor and as President of the Port Authority respectively.

As Mayor, Dipiazza has supported the illegal urbanization since 2001, and as early as in 2004 offered, illegally, the Northern Free Port as host area for the 2008 EXPO without having authority over it.

The urbanization of the Northern Free Port started fraudulently in 2014 with an unenforceable legislative measure, which was therefore challenged before the Court of Trieste in civil lawsuit 5209/19 RG (LINK), which does also oppose to the illegal agreements of the President of the Port Authority, Zeno D’Agostino, with the People’s Republic of China (LINK).

And he started right from the area destined to the logistics platform: first he used it for a car park, and then for the congress center, both times illegally and hiding the fact that the area is unusable without the preliminary removal of the pollution known since 2005.

Indeed, the project of the congress center, approved by the Municipality in 2018, falsely claims that the embankment consists of mere inert materials dumped by the sea. However, the contamination by hazardous substances has to be addressed in the mandatory Environmental Impact Assessment – E.I.A. which, yet, we were unable to find.

As for Zeno D’Agostino, it is known that the local heads of the PD (the Italian democratic party) settled him as President of the Port Authority since 2015 to enforce the illegal urbanization of the Northern Free Port, to which, instead, opposed the previous President, Marina Monassi.

So, it is not a surprise that D’Agostino favors, actively or passively, the illegitimate operations of the Dipiazza Municipal Administration on the Northern Free Port, despite being legally bound to prevent them.

Anyways, it appears evident that in launching and failing to prevent the illegitimate construction of the Trieste Convention Center respectively, even hiding that the area is contaminated by serious pollution, both Mayor Roberto Dipiazza and the President of the Port Authority Zeno D’Agostino counted on the short memory of the citizens, and also of us, the journalists.

But the scandalous events of the Municipality’s illegal landfill of hazardous waste within the Northern Free Port remains perfectly documented, since 2010, in a whole chapter of the formidable investigative book “TRACCE DI LEGALITÀ” (Tracks of Legality) by Roberto Giurastante, the second edition of which was published in 2016 (LINK).

Finally, from the overall analysis of the case, two more relevant elements for journalistic and judicial investigations emerge. The first one is that Mayor Dipiazza results to have conduced those illegal operations with the decisive complicity of the same two municipal officers who, in 2007, allowed him to illegally purchase from the Municipality of Trieste an asset, committing an unprecedented violation and despite a specific law (art. 1471 of the Italian Civil Code) that prohibits such purchases.

The second investigative element is that it results that the magistrates responsible, in 2007, of the filing of the case regarding the landfill of hazardous waste did also cover up, in 2015 and again in 2017, in other proceedings, the aforementioned liabilities of Mayor Dipiazza.

The overall framework is that of a local “system” of power that, since decades, commits systematic, relevant, and continuing violations of law at the expenses of Trieste and of its international Free Port, all while enjoying abnormal protections.

For this reason, we consider it legitimate and dutiful requesting that the aforementioned journalistic investigative elements become also ground for an urgent investigation of the Italian Government on the factual actions of its civil administrative and judicial bodies in Trieste.