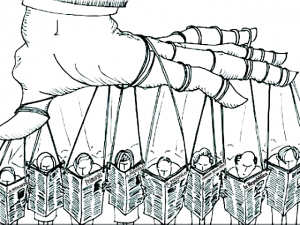 For a democracy to function, it is not enough granting to the citizens the right to express choices by voting. It is also necessary granting serious and complete information to them, because this is necessary to make senseful decisions. Otherwise we are talking about an apparent democracy, under the actual dictatorship of whoever has the power to censor and manipulate information.

It is the case for Italy, which appears as a democracy, but ranks extremely low in global rankings on freedom of information, among the Countries where, the apparent plurality of mastheads is contradicted by the fact that they do treat the same way news that are uncomfortable for the ruling political and economic lobbies.

This happens because the economi survival of nearly all “independent” Italian mass media does not depend on the quality of their work in a free market, rather, it depends on the quantity of Government funds and advertising contracts that are influenced by politicians and big companies who do, therefore, have also the power to force censorship or to manipulate information on those media, humiliating the journalists that work there.

The most recent episodes that we have written about are the violent and continuing disinfomrative aggressions of those “independent” Italian media against Egypt (LINK, LINK), against the new, energy US President Donald J. Trump (LINK) and against Turkey. But now we have a new, clamorous example regarding Trieste, the United States, the United Kingdom, and the whole International Community.

On June 8th, 2017, the International Provisional Representative of the Free Territory of Trieste – I.P.R. F.T.T. announced from Trieste, during a press conference followed by observers from all over the world thanks to live streaming, to have sued the Italian Government and its Fiscal Agencies because they do illegally force and collect the enormous taxes of the Italian State in the Free Territory of Trieste, in breach of Italy’s own legislation (LINK).

They have no right to do that, because the present-day Free Territory of Trieste is a little European sovereign State under a provisional regime of Government that, as for civil administration, the United States of America and the United Kingdom of Great Britain and Northern Ireland, primary administrators on behalf of the United Nations, have sub-entrusted to the Italian Government.

Illegal Italian taxes are ruining the administered Free Territory of Trieste, prevent other States and their enterprises from using its international Free Port and its rights of independent financial center, over which the EU had no power, a well as violating the fundamental democratic principle no taxation without representation (LINK).

All citizens, residents and enterprises of the Free Territory of Trieste and of all concerned States can now join the legal action of the I.P.R. F.T.T. with a simple act, making it a class action. The lodging of such acts has started on June 16th, 2017, with that of the Movimento Trieste Libera – Free Trieste Movement, which is supported by more than 20,000 citizens, and it continued on June 21st with the further intervention of the first 116 citizens and enterprises.

The unprecedented legal action of the I.P.R. F.T.T. against the Italian Government is a relevant news, which regards the Free Territory, Italy, other States, citizens and enterprises at the same time, and it has an enormous economic value, in the present as for the future. But it was censored by all Italian media that depends on public money, the funds granted by the Government lead by the “Partito Democratico” (PD, the Italian Democratic Party), starting from the newspapers in Trieste: Italian language “Il Piccolo” (Gruppo Espresso) and Slovenian language “Primorski dnevnik”.

However, the silence of the press was destroyed by the only big Italian newspaper that is truly independent, because it funds itself selling more than half a million copies per issue, is well-administered, without Government funds and without depending on advertising from third parties.

It is weekly paper “Cronaca Vera” (LINK), which thanks to its popular style is not considered “on the level” of the newspapers at the service of politicians, while the truth is, they have a lot to learn from it when it comes to accurate, independent journalism that does not make compromises, and is awarded for it by increasing sales and a well-established independence.

On the contrary, the sales of the subject press keep falling, increasing their economic dependance on the Italian political system. In Trieste, the circulation of Il Piccolo has declined to bankruptcy limits, while that of the Primorski dnevnik is meaningless.

Don’t you think that this European city-State with rights of international Free Port and indipendente financial center deserves also mass media that is truly independent and worth its roles? We do already have the historical “Il Corriere di Trieste” ready for that (LINK).