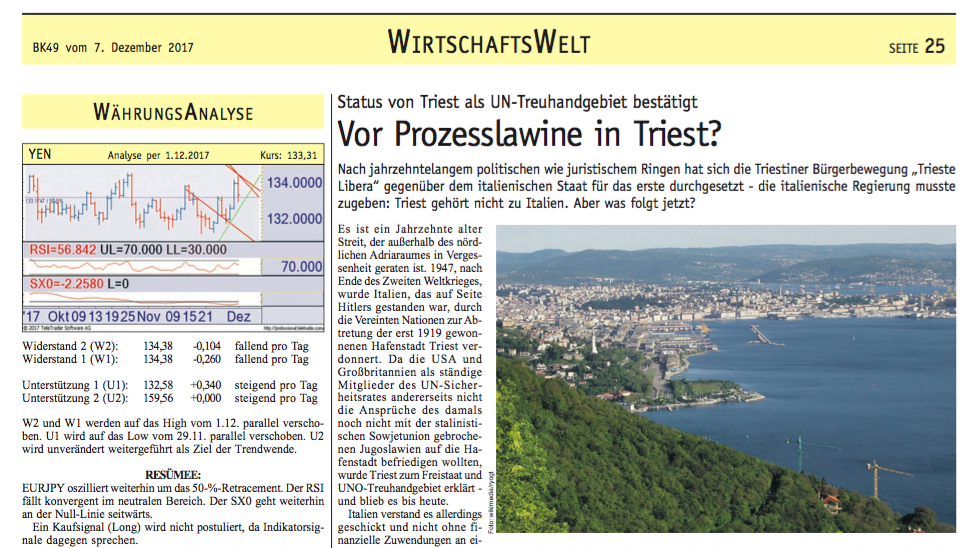 Since six months, the Italian political system is forcing its media to stay completely silent about a legal action on taxation versus the Italian Government, opened by the International Provisional Representative of the Free Territory of Trieste with the support of the Free Trieste Movement and of hundreds of citizens and enterprises (LINK).

But Italian politicians cannot stop the internet, which makes their problem even more evident: they know the legal action is grounded, they are afraid that any news about it would increase the number of interventions, and they try to find a way to force the Court of Trieste to void issuing a judgment in favor of the appellants.

At the same time, news about the increasing successes of the legal battle for the correct administration of the Free Territory of Trieste and of its international Free Port are also carefully reviewed by the analysts of Countries that have special political and economic interests over it.

And so, on December 7th in Vienna, on its latest issue, No. 49/2017, historical and authoritative economic and financial weekly paper Börsen-Kurier published an article by Tibor Pásztor about “Status von Triest als UN-Treuhandgebiet bestätigt – VOR PROZESSLAVINE IN TRIEST ?” (BK49_2017), which we publish hereafter, translated in Italian and in English:

The status of Trieste as UN special trusteeship is confirmed

Loads of lawsuits in Trieste?

After decades of political and legal struggles, the citizen’s movement “Trieste Libera” won for the first time against the Italian State. The Italian Government had to admit it: Trieste does not belong to Italy. But what happens next?

It is a decades long dispute, forgotten everywhere but in the North Adriatic region. In 1947, after the end of World War II, Italy, which was allied with Hitler, was forced by the United Nations to hand over the city of Trieste, obtained only in 1919.

Since the United States and the United Kingdom, both permanent members of the UN Security Council, refused to subdue to the claims of Yugoslavia – which at the time had not yet split from Stalin’s Soviet Union – over the port-city of Trieste, the city was proclaimed a Free State and territory under a special trusteeship mandate, and so it is in our days.

Yet, Italy was able to have the whole question forgotten with nonchalance, and also cutting funds to all local media. This tactic worked especially because the long lasting administration of the Allies proved impossible to continue.

The problem was ultimately solved in 1954, keeping the little Free State divided into two Zones (A and B) which were entrusted under a temporary civil administration to the Italian and Yugoslav Government respectively. Under administration, for instance, does not mean under the State’s sovereignty.

In 1991, when Yugoslavia started to collapse and both Slovenia and Croatia became independent, the international community recognized the new borders of the two new States. Zone B was therefore discarded, but Zone A, consisting in the city of Trieste, the international Free Port, and five smaller Municipalities was spared, even if it does no longer appear on maps.

This unsatisfactory situation had and has not only political importance, but also economic relevance, because it involves the Free Port, which exists since 298 years, over which the 1947 Treaty of Peace consolidated not only special advantages to the victorious powers in World War II, but also, among others, to the successor States of the Austrian-Hungarian monarchy.

After a long dispute and a written confirmation by the UN Secretary General of the time, Ban-Ki Moon, this year the Italian Government had to surrender.

But this is not enough to settle the whole question. A hearing held before the Court of Trieste on 28 November to establish if the Italian collection taxes in Trieste during the past 63 years was legal or not is set to continue in May 2018. The main complainant is the “International Provisional Representative of the Free Territory of Trieste – I.P.R. F.T.T.” and it is supported by “Trieste Libera” as well as by more than 400 citizens and entrepreneurs from both Trieste and abroad. More legal disputes will follow. Last but not least, one important question will be establishing whether Trieste belongs to the European Union or not.

Anyways, both “Trieste Libera” and the “I.P.R. F.T.T.” hope for both an economic reviving of the Free Port, which is on the Suez-Mitteleuropa-Baltic route, as well as for international investors.

2 pensieri su “Vienna: the Börsen-Kurier about Trieste’s legal action on taxation VS the Italian Government”