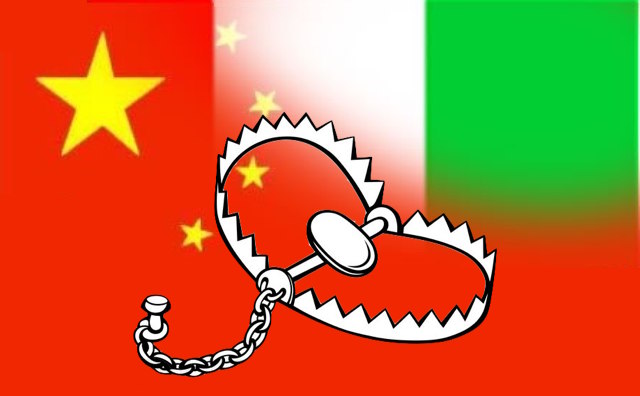 Since long, the analyses about Italy’s strategic unreliability are confirming that the power of mafias and of corruption are in facts its minor causes.

The main source of unreliability is the extraordinary increasing of the Italian political establishment’s ignorance and recklessness, because that establishment is not selected by virtue of its skills and merits, but chosen by negative selection.

This is why Italy is putting the Euro-Atlantic strategic balances at stake, getting involved in bilateral agreements that would allow the People’s Republic of China to colonize the Italian Republic’s infrastructures and event its economy.

We have already written about it, referring to the attempts to illegally include in bilateral Italian-Chinese agreements the present-day Free Territory of Trieste, regardless to its legal status of third Country, and its international Free Port, which is subject to the rights of all States (LINK).

It is attempts that go against the international obligations of the Italian Republic and of its Government respect to the present-day Free Territory of Trieste, but also respect to all other Countries, to the United Nations, and to NATO.

It is international obligations established under the 1947 Treaty of Peace with Italy, the 1954 Memorandum of Understanding (MoU) regarding the Free Territory of Trieste, the Charter of the United Nations, and the North Atlantic Treaty.

The 1954 MoU, in particular, is the instrument under which the Governments of the United States of America and of the United Kingdom of Great Britain and Northern Ireland, in their role of primary administering Governments on behalf of the U.N. Security Council, have sub-entrusted the temporary civil administration of the present-day Free Territory of Trieste to the Italian Government. With immediate further agreements, the U.S. and the U.K. entrusted Trieste’s military defense to NATO.

This means that the Italian Government is bound to abstaining from agreements that breach the North Atlantic Treaty (see its art. 8) not only when it comes to Italy, but also in regard to the administered present-day Free Territory: «the area of Trieste under Italian administration» [NATO documents MCM-14-54, C-M(55),C-R(55)23, C-R(55)8, SGWM 288-55, M.C. 53(55)].

Analysis of the Italian-Chinese MoU

The analysis of the text of the Memorandum of Understanding that the Governments of Italy and of the P.R.C. signed in Rome on March 23rd, 2019 confirms not only the validity of the concerns on the economy and safety of Italy itself as of the NATO area, but also the necessity to restate that no Italian-Chinese agreement can include the Free Territory of Trieste.

As for this second aspect of the question, it was the International Provisional Representative of the Free Territory of Trieste – I.P.R. F.T.T. to take care of it on April 29th, 2019, addressing a note to the Governments of Italy and of the P.R.C. (LINK), informing them of elements that are also of interest for Italian politicians and mass media.

This is because the note of the I.P.R. F.T.T. makes it clear that the Italian-Chinese March 23rd MoU conceals an outright legal-diplomatic trap regarding the protection of investments. A trap that, so far, was either hidden or ignored by all Italian supporters of the agreement, both in politics and in the press.

The trap concealed in the March 23rd MoU

As known, and for obvious reasons, the United States, NATO, and the E.U. had openly opposed the bilateral cooperation agreements, but the Italian Government and the P.R.C. concluded them anyways on 23 March 2019.

What is less known is that the most expert officers of the Italian Ministry of Foreign Affairs were against the agreement as well.

The Governments of Italy and of China have therefore presented the bilateral March 23rd MoU as a mere declaration of intent that would not grant special protection to P.R.C. State investors.

Paragraph V of the MoU (Settlement of Differences) reads indeed «The Parties will settle amicably differences in the interpretation of this Memorandum of Understanding through direct consultations.» (LINK).

However this is not true, because that claim is already neutralized at paragraphs IV and VI of the same MoU.

Paragraph IV (Cooperation Mechanism) does in facts bound the parties to the «full use of existing bilateral mechanisms», which, of course, are not included in the declaration of intents, however, were already established by previous bilateral agreements, ratified and implemented in the domestic law of both the Italian Republic and the People’s Republic of China.

The 1985 Agreement on investments

In both Countries, domestic legislation in force, prioritized under the March 23rd MoU, does also include an “Agreement between the Government of the Republic of Italy and the Government of the People’s Republic of China concerning the Encouragement and Reciprocal Protection of Investments signed in Rome on 28 January 1985”, ratified and enforced in Italy with Law No. 109/1987 (LINK).

The Agreement gives raise to international obligations which, in the Italian Republic’s own legal order, are binding and prevailing also under the Italian Constitution, and in particular under its arts. 10, first paragraph, 117, first paragraph, and 120, second paragraph; furthermore, that Agreement does not appear to openly conflict with E.U. legislation.

Art. 11 of the 1985 Agreement on investments does also require that, unless they are settled amicably, all differences on the matter of investments be settled through arbitration. And this existing bilateral mechanism offers the P.R.C. an absolute strategic advantage in disputes revolving on the protection of its investments in Italy, even at the expenses of the Italian State, of its enterprises, and of its citizens.

Indeed, as reported by investigative journalist Paolo Barnard, in case the powerful P.R.C. investors consider that their investments in Italy were damaged, they can activate the arbitration procedure at their own advantage, while the hosting Country, Italy, its citizens, and its enterprises cannot bring proceedings against a P.R.C. investor that is causing damages to them.

When it comes to Trieste, if it were a port of the Italian State, the 1985 Italian-Chinese bilateral agreement would therefore protect, making them irrevocable, also the acts with which the President of the Port Authority, Zeno D’Agostino, could allow P.R.C. State investors to gain control of Trieste’s main port and railroad facilities.

Thanks to the prompt intelligence activities and political-diplomatic initiatives of the I.P.R. F.T.T. and the surveillance of the primary administering Governments, which are these of the United States and of the United Kingdom, at least the present-day Free Territory of Trieste is going to be relieved of those risks, and so are its international Free Port and its customs port.

However, what has happened is another serious example of the gravity of the strategic thread constituted by the reckless behaviors of an Italian political establishment, which appears less and less suitable to seriously and professionally face foreign policy problems.