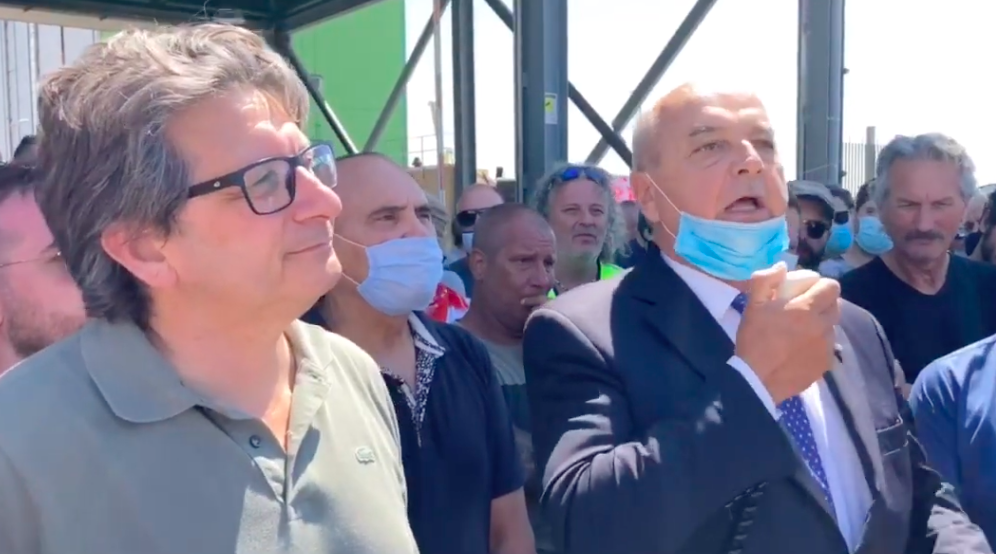 With decision No. 233 of 23 March 2020 – notified on June 4th due to the Covid-19 emergency – the Italian National Anticorruption Authority (Autorità Nazionale Anticorruzione – ANAC) annulled the appointment and the contract of Zeno D’Agostino as President of the Trieste Port Authority (“Port System Authority of the Eastern Adriatic Sea”), which took place in 2016, because it was in breach of the law (Legislative Decree No. 39/2013, art. 4.1.b). The measure was correctly enforced by the Port Authority’s own Officer responsible of preventing corruption and promoting transparency (Responsabile per la Prevenzione della Corruzione e per la Trasparenza – RPCT).

A normal act of law enforcement

The annulment of D’Agostino’s appointment is only one among many identical examples of enforcement of the same law, it can be equally impugned before an Administrative Court, it does not give raise to the nullity and voidness of all previous acts of the Port Authority, and it is a legal procedure, it carries no political implications, and it does not paralyze work in the port.

The procedure started in November 2019 following a detailed complaint, likely presented by the Italian Financial Police (Guardia di Finanza). The decision follows four months of inquiries, including the regular consultation between the parties involved, because the ANAC had promptly informed Zeno D’Agostino about it, and he has thus lodged a detailed defence brief and has lately supported it with a legal opinion.

Also, the ANAC has based its final, dutiful decision on a legal provision that especially involves Port Authorities, as well as on consolidated administrative case law (judgments of the Italian Council of State – Consiglio di Stato No.126/2018 and No. 2325/2019). And, in such cases, it is not the removed officers to be liable for the legal breach, instead, it is the Ministry that appointed them.

So, on June 4th, when the ANAC’s decision was notified, the legal procedure was verifiably known from months to Zeno D’Agostino, to his staff involved in defensive activities and, very likely, also to the economic, political, and unionist circles and groups involved in port activities. Therefore, the information was already rather known also in intelligence circles.

Consequently, until June 4th nothing abnormal had happened: the Italian Anticorruption Authority had dutifully enforced the law, exactly as it did in other, identical cases in the past, its decision was already envisioned, and it merely consisted in a provisional placement of the Port Authority’s Presidency under compulsory administration until either a possible appointment ex novo of D’Agostino himself, of until his normal substitution with another officer equally, or better qualified.

All of this, once again, without causing all acts adopted by Zeno D’Agostino to become null and void, thus without damaging the Port Authority, port activities, or enterprises, not even the dockers. And without ruling or implying that Zeno D’Agostino or others are guilty of corruption.

There is not even a substantial change in the management of the Port Authority itself, because the extraordinary Commissioner, appointed immediately, is Mario Sommariva, General Secretary and right-hand man of D’Agostino himself, whose previous acts he did immediately validate.

Finally, there is no reason to claim Zeno D’Agostino is irreplaceable when it comes to professional competences. He is not the only or the top expert when it comes to logistics in Trieste, in Italy, in Europe, or in the world.

For those reasons, the revocation of Zeno D’Agostino from the Presidency of the Port Authority pursuant to the law should have caused only normal reactions as the kind dismay of his supporters, and calls for his renewal or prompt substitution.

Absolutely abnormal reactions against the law

Instead, in Trieste there was an outbreak of absolutely abnormal reactions of immediate, violent public opposition to the enforcement of the law, and a “witch hunt” against whoever has reported the infringement to the Guardia di Finanza.

This means that the pattern of this reaction is the same of the camorra in marginalized Naples neighborhood, who target those who try to arrest criminals in the hiding. Yet, there are three main differences, and two clear analogies.

The first difference is that D’Agostino is not some criminal in the hiding, and the ANAC has not charged him with civil or criminal liabilities. He is only a public officer who, accidentally and with no fault, was catch in a case of incompatibility by law, the responsibility of which falls, again, on the Italian Ministry that appointed him in 2016.

The second difference is that here in Trieste it is not marginalized people who are opposing to the enforcement of the law. It is the heads of the local political, economic, unionist, and media system, and also D’Agostino himself, together with other representatives of the authorities.

Among them, the newly appointed Commissioner, Sommariva, the Mayor, some parliamentarian, and even two Ministers of the Government in office, one of whom is from Trieste. The other one does not know the real situation, yet, it seems to be willing to try influencing or even bypass the decisions of the judiciary.

The third difference is that this outbreak of oppositions to the law is justified and fueled with a powerful, coordinated campaign to spread false information. The people are tricked into believing that D’Agostino fell victim of obscure political conspiracies, and that his substitution with another officer would cause severe damages to the port, to the enterprises, and to the dockers.

The real reason why, in Trieste, the local establishment is willing to go as far as to oppose law enforcement in order not to change the President of the Port Authority, therefore, cannot be concerns over the development of the Port itself. The true reason is fear, because a new President may stop and report to the authorities the well-known illegal activities that, instead, D’Agostino tolerates and permits.

Indeed, so far D’Agostino has allowed operations that are proved to be illegal on the international Free Port of Trieste, and due to this, the Port Authority, represented by its President pro tempore, was summoned before Court in civil lawsuit No. 5209/19 (LINK) and, since 25 October 2019, along with the Mayor and other Municipal officers, it is involved in a criminal complaint for the crimes of forgery and falsehood and fraud against public authorities (LINK).

Essentially, it is flagrant violations of the legal status, of the management, and of the ownership of the assets of the international Free Port of the present-day Free Territory of Trieste in favor of monopolist, powerful local people, of communist China, and of enormous, illegal housing speculations at the expenses of the Northern Free Port (also called the “old port”).

On the other side, the first analogy with the situations involving the camorra is the fact that such violations are allowed by a well-known state of weakness and corruption of the political-institutional fabric, which in Trieste has special economic and strategic implications because it compromises the management of the international Free Port, established to serve the Countries of central-eastern Europe (those involved in the Three Seas Initiative).

The second evident analogy with the situations involving the camorra is the public “hunt” to the unknown source that denounced the breach of the law, accused of causing the alleged “disaster”. On June 6th, Zeno D’Agostino did go as far as to address dockers with a speech claiming he knows how the source is, and threatening him with punishments. The threatening speech was attended also by three public officers: Commissioner Sommariva, the Mayor, and the vice-mayor.

The group of dockers that supports D’Agostino has already illegally blocked one entrance of the port, and is not threatening to stop all port activities if the Administrative Court does not suspend the enforcement of the ANAC’s decision.

Who are D’Agostino’s defenders:

The current, authoritative defenders of D’Agostino are the same people who have either organized or are supporting those illegal operations, or who gain profit from them, and also the same who, in 2014 and 2016, promoted his appointment as President of the Port to substitute the previous President, Marina Monassi, who instead defended the international Free Port.

The substitution had been promoted with a long, violent, denigrative, and defaming campaign of the press on local newspaper against President Monassi to portray her as an unworthy person. The same newspaper has later and ever since launched an opposite campaign of disproportionate exaltation of D’Agostino’s work to make him appear as irreplaceable. And public opinion fell for it both times.

But as for now, the illegality of those operations is perfectly documented and under the attention of the judiciary, the consequent civil, criminal, and economic liabilities are extremely significant, and they can no longer be avoided by forcing the media to stay silent on the topic or obtaining that certain magistrates cover up the investigations or divert the outcome of trials.

A new fact and the needed measures

The new fact, therefore, is not the decision, already expected, that the Italian Anticorruption Authority annulled Zeno D’Agostino’s appointment because it was against the law.

The new fact is that the measure of the Anticorruption Authority has revealed, like never before, the wide, powerful local network of corruption and disinformation that parasitizes and blocks, since decades, the international Free Port of Trieste and favors China with dangerous and severe damages for the city and for the Euro-Atlantic economic and strategic balances.

As known, the primary administering authorities of the present-day Free Territory of Trieste and of its international Free Port on behalf of the UN are, since 1947, the Governments of the U.S. and of the U.K. which, since 1954, have sub-entrusted its temporary civil administration to the Italian Government, and its military defense to NATO (LINK).

Also, substituting Zeno D’Agostino with another Italian officer is not enough to remediate to the breaches of law, because the legislation in force, which the Italian Government is bound to respect, establishes that the management of the international Free Port of Trieste must be subject to an international Commission and carried out by a Director who cannot be a citizen of Italy or of former Yugoslavia.

The Italian Government is already before Court in Trieste (LINK) to respond not only of the breaches of the British-US mandate, including the obligations regarding the international Free Port, which are committed by the local system of corruption with the consent of Zeno D’Agostino, but also for the attempt to illegally hand over the Free Port’s control to China (LINK).

But there are also documental evidences that, when it comes to this subject, the Italian magistracy in Trieste is not yet capable of granting not only its own independence, but also the prompt enforcement of the law.

At the same time, both the D’Agostino case and China’s pressing to gain control of the Free Port, or to bypass it from the port of Piraeus on the Athens-Belgrade-Budapest railway, prove that the ending of the breaches and the re-establishment of the rule of law in Trieste are increasingly urgent.

It seems rather evident that, at this point, there are all factual and legal premises to face the situation promptly and efficiently by entrusting all investigations to a serious Italian and international Investigation Committee established by joint initiative of the three administering Governments.