Trieste and the other States of the Three Seas Initiative.

Trieste-Rome, 29 October 2022 – The International Provisional Representative of the Free Territory of Trieste – I.P.R F.T.T. has presented its appeal for annulment against judgment No. 8600/2022, with which last March the Italian Court of Cassation refused to review the Treaties and laws in force, which establish the Italian Republic’s and the Italian Government’s obligations towards the present-day Free Territory of Trieste, including the rights of all other States over its international Free Port.

Furthermore, in that decision, the Italian Court of Cassation attempts to endorse certain well-known political claims according to which the Free Territory of Trieste “does not exist and never existed”.

However, such political claims are manifestly false, and if they were true, they would also imply the international Free Port’s nonexistence, because it is legally established since 1947 as a State corporation of the Free Territory of Trieste.

The writ of summon for annulment, dated 15 September 2022 and lodged before the Italian Court of Cassation under RG No. 23050/22, is published here (in English and in Italian) and does also reserve further action before the competent international and European courts.

Indeed, the impugned decision is abnormal, because domestic judges, as well as all of the Italian State’s public officers, are constitutionally bound to know and enforce, as part of their duties, also the domestic laws enforcing their State’s international obligations, however, they have no authority to violate, annul, or amend them.

This does also mean that, regardless of the judgment’s nature or instance, an Italian Court’s refusal to review and to enforce the aforementioned international obligations has no effect on them, and does not justify further violations committed by other Italian judges or Italian public officers.

Furthermore, any Italian court refusing, on political grounds, to review and enforce legislation in force would also violate its Constitutional obligations of fairness and independence, consequently denying the appellants the universal and fundamental human right to a fair trial before an independent and impartial tribunal.

For all those reasons, the I.P.R. F.T.T. considers the impugned decision «a political judgment that goes against the law, as well as subversive of legality and of the international legal order established by the port-WWII Treaties of Peace, which recognize the present-day Free Territory of Trieste as an independent and neutral European sovereign State, with an international Free Port open to the ships and freight of all States, without discrimination».

The present-day Free Territory of Trieste borders with Italy and with Slovenia, and since 1954 its temporary civil administration is sub-entrusted to the Italian Government under a special trusteeship mandate by the Governments of the United States of America and of the United Kingdom as its primary administering Governments on behalf of the UN Security Council.

The subject is ruled by a coherent, univocal body of laws (LINK) and it is not an internal matter of the Italian State, because it regards another, recognized sovereign State, as well as its rights and roles within the international law, and the deriving rights of all States.

In particular, the correct administration of both the present-day Free Territory of Trieste and of its international Free Port has an increasing strategic relevance in the consolidation of the European Three Seas region (Baltic-Adriatic-Black Sea) and for the Western Balkan’s own stabilization, both of which are fundamental condition for Euro-Atlantic balances within the global strategic context.

This is why, since as early as 2017, the I.P.R. F.T.T. opened a complex legal battle summoning before Court the Italian Government to have it comply with its mandate’s obligation in regards to Trieste’s taxation regime (LINK) the Italian Value Added Tax – IVA’s collection (LINK), and the international Free Port’s management (LINK).

The third lawsuit is the most embarrassing for Italian Courts, because it accuses the Italian Government of port frauds and illegitimate agreements with Communist China, as well as because denying the Free Territory’s legal action would also mean denying the legitimacy of the international Free Port’s regime and, by extension, the rights of all States and their enterprises over it, including Italy’s.

So far, more than 1600 citizens, organizations, and enterprises from Trieste and from other States have joined the three legal actions to support the I.P.R. F.T.T. 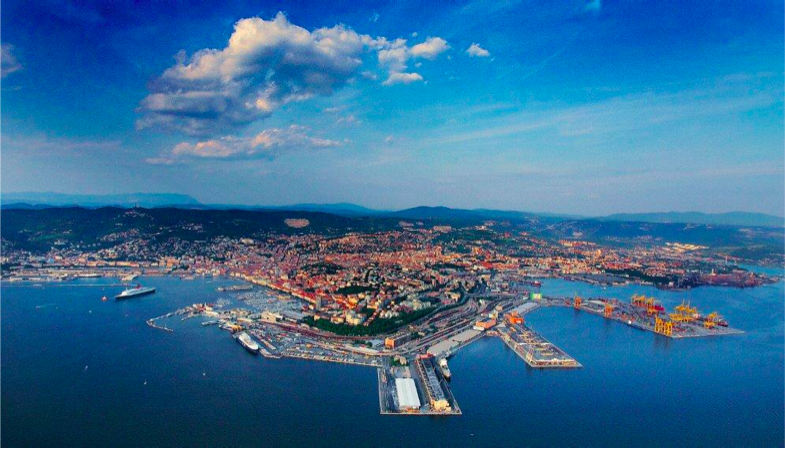 The international Free Port of Trieste.